168. Introduction to PHP DOCX to Image Extraction
168. This article
168. Google OAuth Offline Access and to Other API with Limited Lifetime Refresh Tokens After their Expiry
171. How Can PHP Create Badges That Show the Quality of the Work of a Developer
171. How to Implement a PHP Google Translate Service in Your PHP WebSite Using the Google Translate API from JavaScript

In the previous article, we talked about Dependency Injection, the Single Responsibility Principle, and the various ways it can be implemented.

Injecting Dependencies Via A Constructor

Injecting Dependencies Via A Setter Method

The Need For A Dependency Injection Container 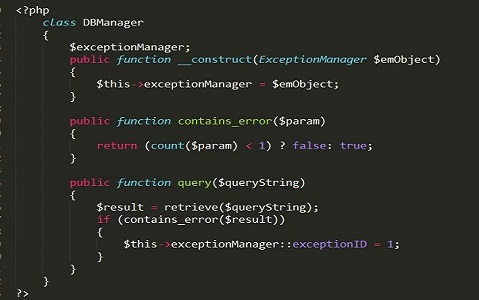 In the previous article, we talked about Dependency Injection, the Single Responsibility Principle, and the various ways it can be implemented.

I am beginning this article by giving a real life example script I just finished debugging. I had a Database Abstraction Class that helped me to manage communications to and from a database, which was working fine except errors and exceptions were not handled properly.

Instead of "trying and catching" all the exceptions within the class, I decided to write an Exception Manager class. This class provides a setter method that accepts an error id and logs the error after notifying the user.

Although, my Database class could easily inherit the Exception manager class, a Service provider or a Dependency Injection container provided more advantages because they remove the overhead that comes with class inheritance and makes it easy to develop both objects independent of each other.

The code snippet below shows a very "compressed" version of both classes.

There are different ways the ExceptionManager object can be passed into the DBManager class as a dependency. Below follows examples of all three ways and a rewrite of the necessary parts of the above code snippet to explain them.

Injecting Dependencies Via A Constructor

From the above, we can see that instead of "throwing a new exception", our ExceptionManager class is now handling all errors and exceptions properly and then injecting this object into the DBManager class made the whole process seamless.

Injecting Dependencies Via A Setter Method

For a better understanding of this, let's go through the constructor method again.

The constructor which is a "special" kind of method accepts an instance of the dependency as a parameter. It then stores this instance in a class variable and every other method and property can interact and use the object value of the class variable from any scope.

A method which is usually referred to as a setter method in most literature, can be created to do this. As an example, let's create a setter method for our DBManager class.

The Need For A Dependency Injection Container

So far, we've been treating the case where we need only one dependency. In most real-life scenarios our DBManager might not only need an ExceptionManager class, it could also be dependent on a DateTime class for logging the time period of query execution or an ArrayParser class, an Iterator class or even all four at the same time.

An object is not limited to the number of dependencies it requires at a time, In fact thats the purpose of Object Oriented Designs, code reusability, we use and reuse other objects instead of rewriting them all over again.

So back to the question, our DBManager is dependent on the following objects: an ArrayParser object, a DateTime object, an Iterator object and an ExceptionManager object. How do we inject all these into our dependent class?

We can also use a very simple methodology to load our dependencies using the setter or constructor methods approaches. We can just pass them all as parameters or via an array. This will do, but it is not advisable. It is best to always use a Dependency Injection container or a Service provider.

There are various Dependency Inject containers for PHP such as PHP-DI, Pimple and numerous others. A search for "Dependency Injection" under the PHP tag on github would return tons of packages.

The PDI package is more of a service provider that automatically knows when and where you need a dependency and injects it into your dependent object using an autoloader.

Usually, to inject your dependencies (if you are not using an IoC container), you use an interface, a constructor or a setter method to "manually" inject the dependency into your program.

With PDI, you do not have to do all these, you just call an instance of the dependency object and PDI injects it into the dependent class for immediate use.

The DBManager class inherits the PDI class, this makes it possible to use the ExceptionManager class without injecting it via any method, PDI does this automatically. Assuming we already have a DateTime object that contains a log method, we can also load and use it automatically without first injecting it or extending, just like we did above.

PDI contains no public method or interface, it's main job is to "find" and "provide" (or inject) any dependency into your project. Internally, it has a setter and getter method that creates a variable with the name of the class which is your dependency and gets an object instance of that class, respectively.

In other words, you provide the name of the class you need to use and PDI returns an object instance of that class on the fly. I illustrate how PDI works with another example below.

As we can see from the above, we did not create a new instance of either of the Automobile and Engine class. We just used them "as if" they have been instantiated before. Calling

triggered PDI's call to the method and the object of the Automobile class was returned immediately, then we could use all the methods and properties inside it, just like we also did for the Engine class

PDI completely supports PHP 7 and is still under active development but you can download it from the PHP Classes site . You can also clone it from github.

We have seen why dependency injection is important and how to properly inject dependencies into our programs. We talked about the PDI service provider and used code samples to explain how it can be used. In the final article to this series, I will talk about the PHP-DI and Pimple containers, compare them and explain how they both work, individually.

If you liked this article or would like to ask a question about how the PHP DI package works to make dependency injection more elegant, post a comment here.