2012 was yet another great year for PHP and its community.

Read this article to learn about the PHP Zeitgeist top searches just published in the PHP Classes site, as well look back at other important developments in this PHP community site.

What is the PHP Zeitgeist?

Analysis of the PHP Zeitgeist 2012 Results

Suggestions from PHP Zeitgeist to Win the PHP Innovation Award

What is the PHP Zeitgeist? 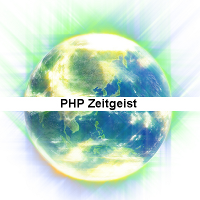 For those that are not yet familiar with this, PHP Zeitgeist is an initiative launched by the PHP Classes site to analyze what the PHP developers have been looking for in the past years.

It is an initiative started in 2010 inspired on the Google Zeitgeist, except that it is based on searches the PHP developers did on the PHP Classes site rather than on Google Search.

The PHP Zeitgeist produces a list of top keywords that become relevant on each year.

The algorithm to generate the PHP Zeitgeist top relevant keywords did not change since the last year. It considers the top most searched 3,000 keywords of the year and picks the ones that did not make the top 100 relevant keywords in all the previous years.

This year only a few new keywords were added to the filters in order to avoid giving relevance to some keywords that seemed to have been injected by spammers.

This stabilization of the algorithm seems to reflect its maturity and capability to get pretty good results that may be useful for subsequent analysis.

Analysis of the PHP Zeitgeist 2012 Results

Looking at the PHP Zeitgeist results chart we can detect several interesting patterns. Lets analyze some of the more prominent patterns.

One of the most noticeable patterns in the PHP Zeitgeist 2012 top keywords is the name of many Web applications that provide an API and where launched in 2012 or became more relevant this year. That is the case of instagram, google drive, tumblr, pinterest, google+, skydrive, openstreetmap and google maps v3.

The continued growth of importance of social networks is making more and more developers become interested in developing sites and applications that access social network APIs on behalf of the user, as well authenticate users with their social network accounts.

Mobile first is a trend being followed by many Web developers and designers. It consists in thinking new sites and applications first to be run on mobile devices that have limited display sizes.

E-commerce and Internet based payments are areas with great growth that seem to be consolidating this year, as demonstrated by top search keywords like: opencart, nfe, pagseguro, sagepay, prestashop, edifact, mercadopago, money bookers, Cielo and sepa.

Suggestions from PHP Zeitgeist to Win the PHP Innovation Award

Despite the keywords in the PHP Zeitgeist chart had a lot of searches, in some cases there are not yet classes to implement the functionality the users are searching for.

This is an opportunity for developers that contribute to the PHP Classes site to get suggestions for classes that may be considered innovative.

Submitting an innovative class before other developers do so, will get you nominated to the PHP Programming Innovation Award, for which you may get more recognition and prizes.

So, if you are a contributor looking for suggestions to contribute innovative packages, what you can do is to go to the PHP Zeitgeist page, click on the links of keywords you think there is not yet a class in this site for that purpose.

That will lead to a search results page for the respective keyword. If no results were found, chances are that keyword is about a feature that would be a good to have in an innovative class. If you have a class for that purpose or you quickly develop a class before other developers do it, you have a great chance of being nominated for the innovation award.

Furthermore, the PHP Zeitgeist lists keywords that are frequently searched. So not only a new class for that purpose may be considered innovative, but it may also have lots of users interested in a such a class.

The PHP Zeitgeist is a feature that is well appreciated in the PHP Classes site. It was only possible thanks to many users that searched in the site for classes that they need.

The more users search in the site, the greater are the chances to see more interesting trends revealed by the PHP Zeitgeist.

In 2012 the site has gone through several interesting developments that aimed to make the site more interesting to all PHP developers.

Usually I write a post about this by the end of the year, but this time I could not make it in time to publish before Christmas. Therefore I am going to briefly mention what were the most important developments in the PHP Classes in 2012, some of which you may not have been aware.

Improvements in the Friends of the Site Rankings

The friends of the site initiative is meant to give credit to users that bring more friends to the site. This is an initiative started in 2002 with the purpose of increasing the number of contributors that share useful classes in the site.

Avoiding the Pain of  Registering and Logging in the Site

One long time complaint about the PHP Classes site is that there is a registration requirement to download great part of the packages.

This is not be obvious to everybody, but this aspect of the site allowed to implement features that make the site more compelling for each author that publishes their packages here. The registration requirement is an option of each author, but most authors keep it to benefit of those features, despite some users do not like the requirement.

Anyway, reckoning that it is hard to explain that ultimately the users are the ones that benefit most of the way the site works, this year it was implemented a different way to access the site that does not require the users to go through a painful registration process.

Since April 2012 the authentication of users can be done using accounts of other sites like Facebook, Google (Gmail, etc..), Microsoft (Hotmail, etc..), Yahoo, StackExchange (StackOverflow, etc..) and GitHub.

This means that new users can register right away using accounts of those sites without having to create a new password and without going through a full e-mail verification process, which usually used to be a source of great frustration.

Also the current users may login using accounts of those sites, thus without having to remember and to enter the user name password they used when they registered.

Additionally, the registration and login process was optimized to minimize the number of redirections between pages of the PHP Classes site and the Icontem Accounts site on which the management of all accounts is centralized.

So, if in the past you were reluctant to recommend a class available in this site because of the registration process, from now on be aware that the process is no longer painful and you may recommend it to your friends without fearing to upset them.

Sharing Your Activity in the Site on the Social Networks

Social networks are a good place to share with your friends the great content that you find or publish in this site. However it may become a bit tedious to do it manually every time you publish something interesting in the site.

You may find more details about this initiative in the announcement article.

System of Missions, Levels and Badges to Become a PHP Master

There are plenty of things each contributor can do to make their work more visible in the PHP Classes site and other sites, and so get more visibility and recognition for the work you share in the site. This way to can evolve and go through a path to become a PHP Master.

Explaining all that a contributor can do would take him a long time and patience. Therefore the PHP Classes site launched in November a new system of missions and levels that each developer can complete gradually, unlocking nice badges each time you level up.

This is a fun and interesting to learn many things that can help a PHP developer to become more reputable in the PHP Classes site.

This system already had a few unannounced enhancements after it was launched. One of the changes made some missions optional, like for instance the linking with social network accounts.

Another enhancement added some nice animations to the status and briefing pages. Those animations consist in nice graphics being presented near the accomplishment and next step messages. So now it is easier to understand what you have accomplished and what you need to do next.

You may learn more about this system of missions and levels in the announcement article, which includes a nice and short demonstration video.

As you may have read, 2012 was an intense year in terms of development of new and interesting things that helped making the PHP Classes site a better place to share interesting PHP components and make that a fun and rewarding activity.

In 2013 you can count with more new things that will make the site even more fun and rewarding. I have lots of things planned to do but I will not bother you with the details for now.

So, if you want to share any new ideas or you want to make a comment, a criticism or send any other kind of relevant message, please feel free to post a comment to this article here.